WHAT ARE UTERINE FIBROIDS?

Uterine fibroids are very common non-cancerous growths that develop in the muscular wall of the uterus. There are four basic types of uterine fibroids, which very rarely become cancerous. You might hear them referred to as “fibroids” or by several other names, including leiomyoma, leiomyomata, myoma and fibromyoma. Uterine fibroids can range in size from as small as a quarter to larger than a cantaloupe. In most cases, there is more than one fibroid in the uterus located in various parts of the uterus. While fibroids do not always cause symptoms, their size and location can lead to various problems for some women, including pain and heavy bleeding.

Of the 600,000 hysterectomies performed annually within the United States, one third are due to symptomatic fibroids. Now there is a proven, non-surgical alternative to hysterectomy for the treatment of symptomatic uterine fibroids, uterine fibroid embolization (UFE). UFE is a safe method and, like other minimally invasive procedures, has significant advantages over conventional surgery. In order to properly evaluate fibroid tumors in your uterus and fully understand how they may be affecting you, contact our fibroid specialist for a consult. 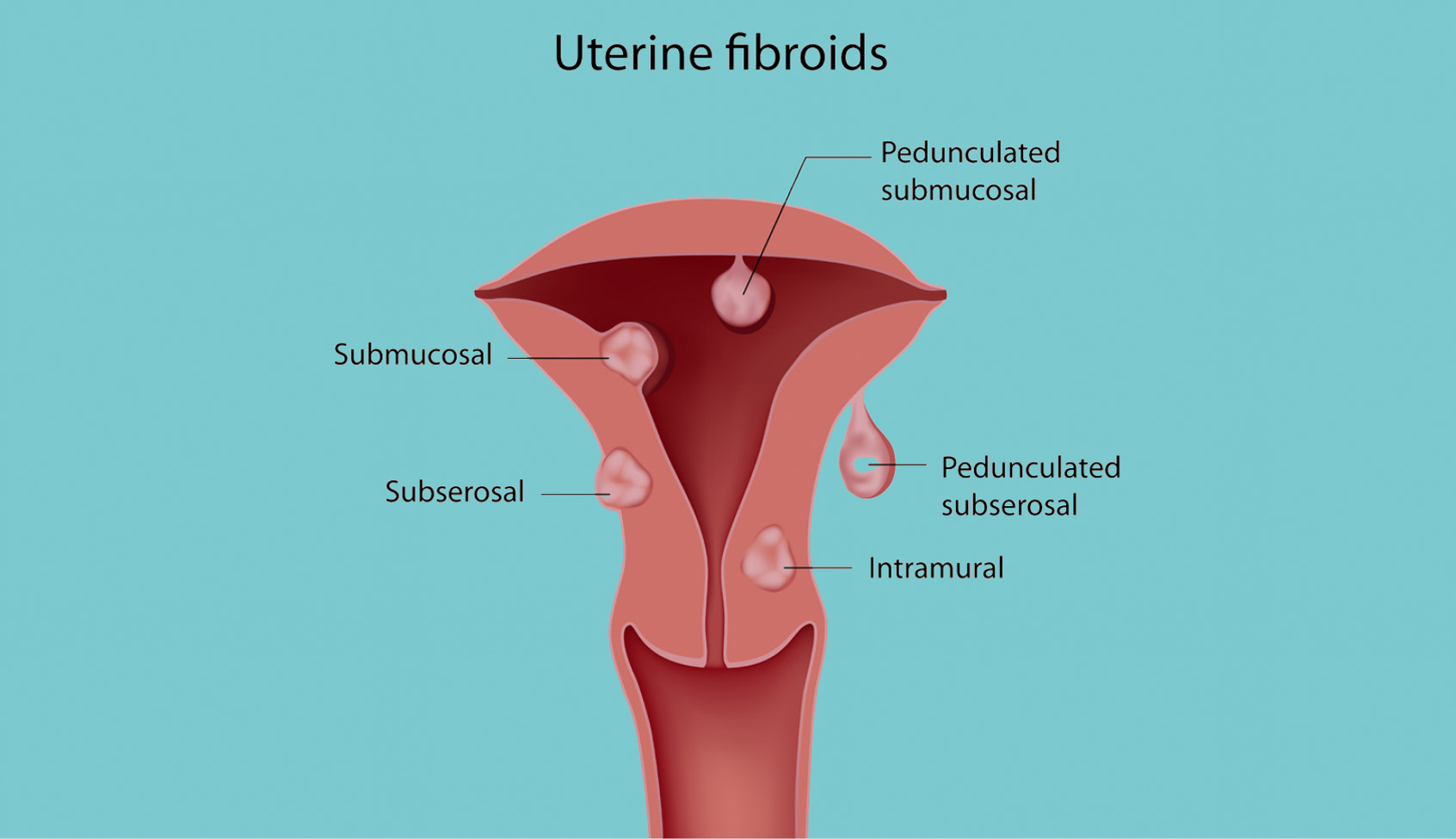 there are 4 types of fibroids

Fibroid types are defined by where they grow in relation to the uterine wall.

These are the most common type of fibroid which form inside the uterine wall which can enlarge the uterus as they grow. These can also affect a woman’s menstrual cycle including having longer and heavier cycles.

These types grow outward as they are grown on the outside of the uterine wall. As they enlarge, they tend to put pressure to the surrounding organs causing pain and other bulk like symptoms. These types tend to not cause heavy menstrual bleeding, but may cause heavy cramping.

These fibroids form beneath the uterine cavity lining and are less common. They can protrude into the uterine cavity or cause fertiity problems by blocking a woman’s fallopian tubes. They also tend to have heavy and prolonged menstruation as symptoms.

Types of fibroids that grow on stalks or stems that are attached to the uterine wall. They can grow either outside the uterus or inside the uterine cavity. These tend to have symptoms of pressure and pain, in particular if the fibroid becomes twisted on the stalk.

How common are fibroids
and are you at risk?

Fibroid awareness
or lack of it

HOW COMMON ARE UTERINE FIBROIDS?

More than 200,000 hysterectomies are performed each year for uterine fibroids with direct health care costs for fibroids exceeding $2.1 billion.

Uterine fibroids become more common as women age, with the frequency increasing during the 30s and 40s, and up through menopause. After menopause, fibroids usually shrink as they are very responsive to hormones.

African-American women are 3-5x more likely to develop fibroids than white, Asian and Hispanic women. As many as 50 percent of African american women have fibroids of a significant size with an earlier age of onset of symptoms.

Having a family member with fibroids increases your risk. If a woman’s mother had fibroids, her risk is about 3x higher than the average woman.

Women who are overweight are at higher risk for fibroids. Being overweight or obese increases the risk of fibroids by 2-3 times. Fibroids are estrogen-sensitive, and estrogen is stored in fat. Therefore, reducing body fat by trying to eat healthy, lose weight, and exercise are all very helpful in potentially slowing fibroid growth.

Eating a lot of red meat and processed meats such as ham and bacon have been linked with a higher risk of fibroids. Researchers followed more than 22,000 premenopausal women and found that those who had a higher intake of fruit and preformed vitamin such as whole milk and eggs had a lower risk of developing uterine fibroids.

Research has found that women with high blood pressure were 24% more likely to report fibroids compared with women with normal blood pressures. This association was seen across all ethnicities.

A Harris Poll Survey in 2017 surveying over 1100 women found that there was major lack of awareness of uterine fibroids and knowledge of their treatment options. Up to 80% of women will develop uterine fibroids by age 50 and may cause a variety of symptoms.

The American college of Obstetrics and Gynecology (ACOG) recognizes uterine fibroid embolization (UFE) as a safe and effective treatment for fibroids, a treatment available for more than 20 years. UFE like other minimally invasive procedures has significant advantages over conventional surgery, but despite the many benefits, a large number of women with uterine fibroids are not given the information they need to make well informed decisions about their treatment options:

HOW ARE UTERINE FIBROIDS DIAGNOSED?

Uterine fibroids are typically suspected after physical examination and clinical symptoms. Your doctor may feel a lump or mass on your uterus or feel your uterus is enlarged overall. The doctor may describe how small or how large the fibroids are by comparing their size to the size of an uterus would be during pregnancy.

The uterine fibroids can be confirmed using non-invasive imaging techniques such as ultrasound or magnetic resonance imaging (MRI). An ultrasound uses sound waves to create a picture of your uterus with the ultrasound probe placed on your abdomen or inserted into the vagina. An MRI, however, is the optimal imaging study to not only evaluate your uterus but also the surrounding pelvic structures using magnets without x-rays. A pelvic MRI is required in all patients being evaluated as potential candidates for uterine fibroid embolization. The MRI provides detailed information concerning the size, number, location and blood supply to the fibroids.