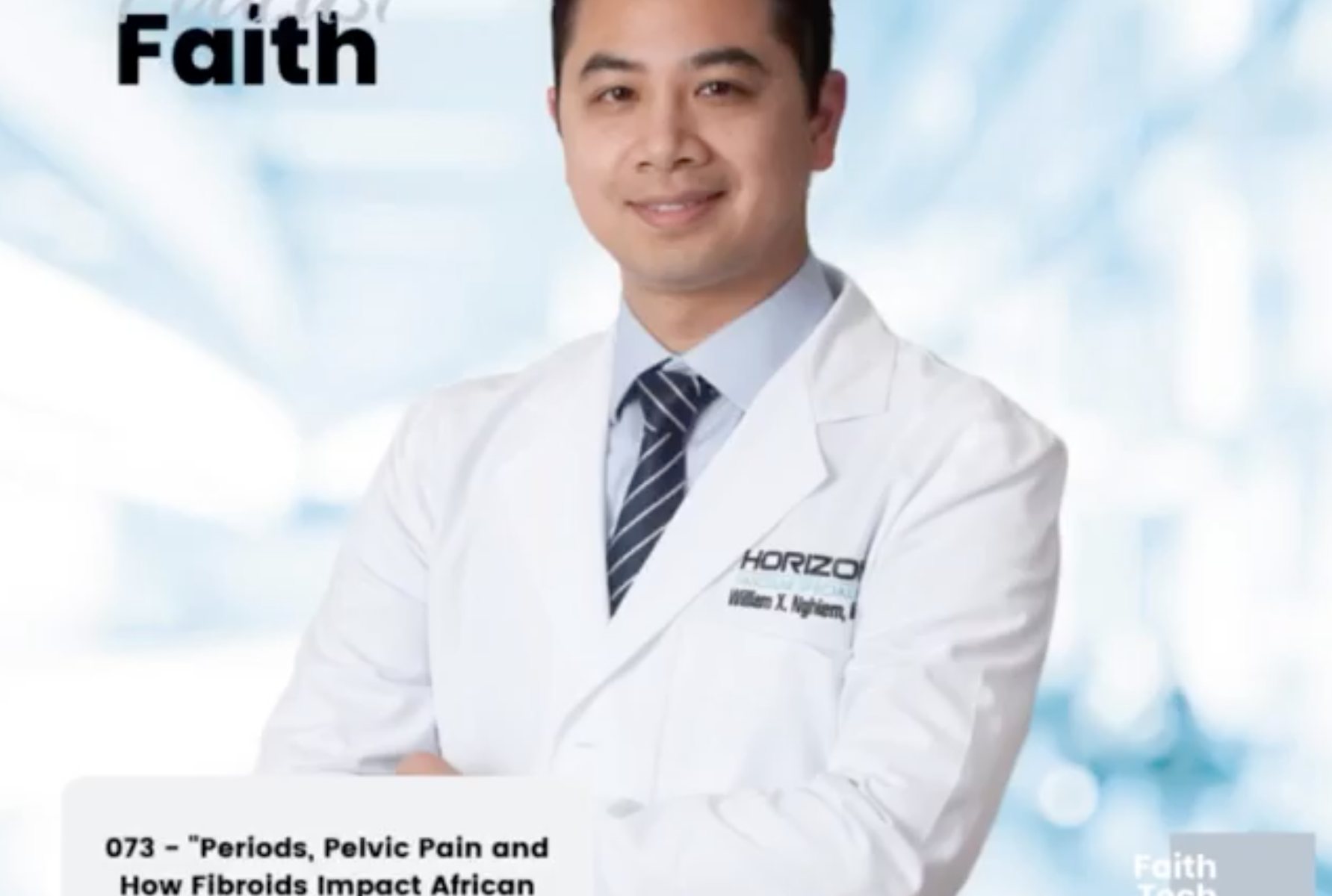 CLICK HERE TO LISTEN TO DR. NGHIEM’S PODCAST ON WALK BY FAITH

Uterine fibroids are a common gynecologic condition among women and the primary reason for hysterectomy for US women. Over their lifetime, about 80 percent of black women and 70 percent of white women will develop fibroids.  Fibroids, also called leiomyomata or myomas, are noncancerous tumors that develop within the muscle tissue of the uterus (also called the womb).

Anywhere between 20 to 80% of women will develop fibroids by the time they turn 50. And although they can affect all women, Black women are about 3 times more likely than white women to develop fibroids, and they tend to develop them at a younger age than other women.

Although most fibroids don’t cause symptoms, Black women are also 2 to 3 times more likely to have symptoms, including:⠀

And this isn’t exactly a symptom, but some women develop anxiety disorders by constantly worrying about bleeding through clothing or on mattresses.⠀

CLICK TO LISTEN TO DR. NGHIEM’S PODCAST ON WALK BY FAITH 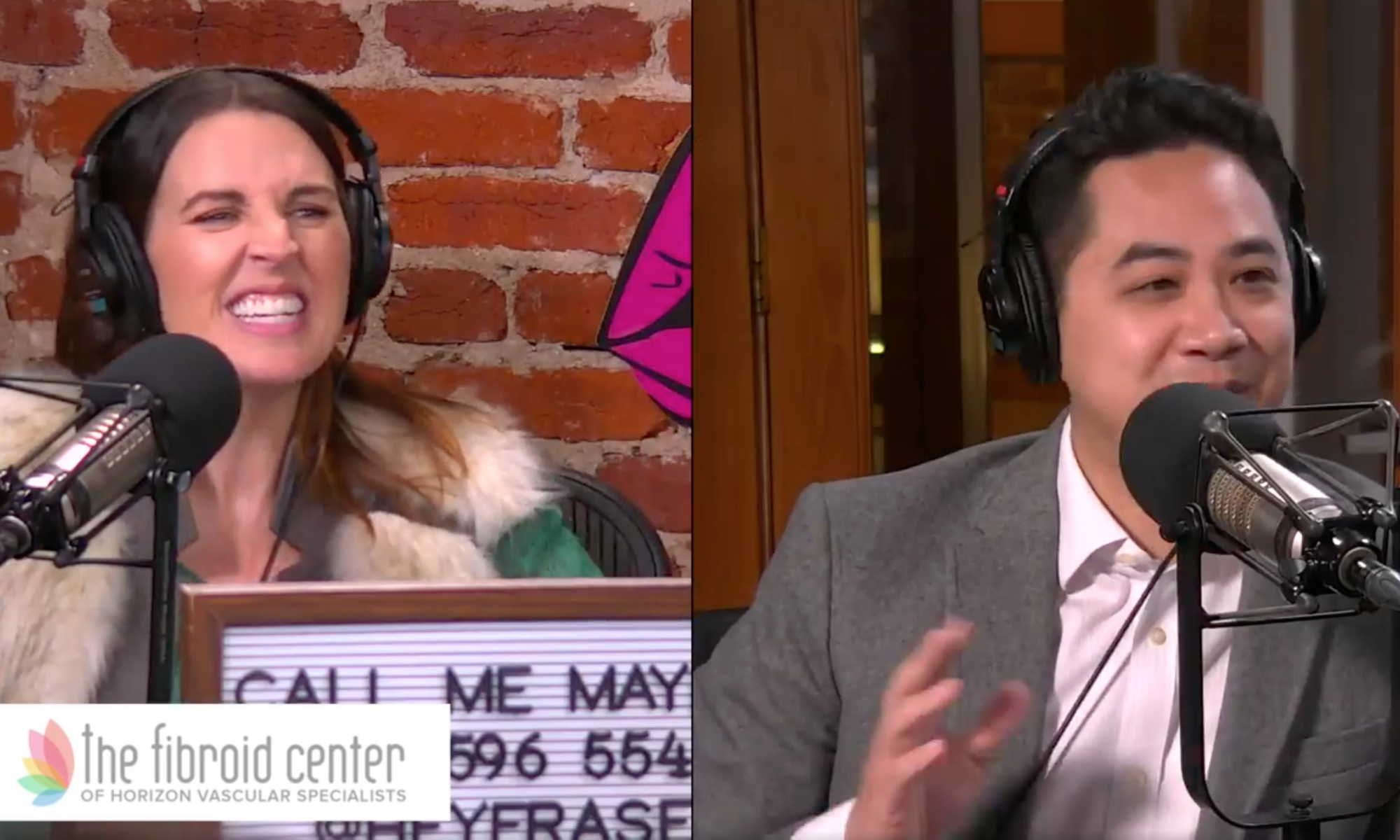 Check out our Facebook post! In it, Dr. Nghiem is sharing uterine fibroid knowledge and spreading fibroid awareness on the heyfrase show! In addition, he helps answer common questions and talks about common signs and symptoms of fibroids. 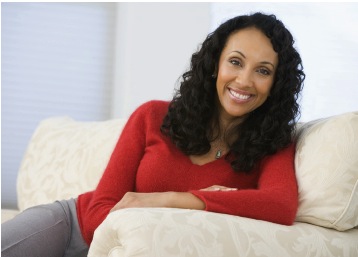 Of the 600,000 hysterectomies performed annually within the United States, one third are due to symptomatic fibroids. Now there is a proven, non-surgical alternative to hysterectomy for the treatment of symptomatic uterine fibroids, uterine fibroid embolization (UFE). UFE is a safe method and, like other minimally invasive procedures, has significant advantages over conventional surgery.

Visit our Women’s Health section to learn more about our services and uterine fibroid embolization and see how Horizon Vascular Specialists can help you. 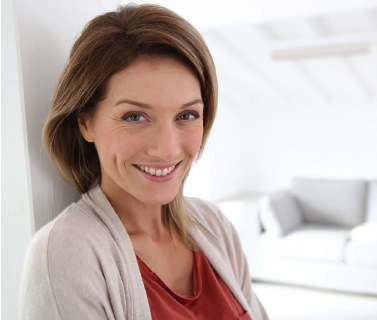 It is estimated that one-third of all women will experience chronic pelvic pain in their lifetime. The causes of chronic pelvic pain are varied, but recent advancements show the pain may be due to hard to detect varicose veins in the pelvis, a condition known as Pelvic Congestion Syndrome.

The common symptoms include:

Between the ages of 20 and 50, up to 15 percent of women are believed to have pelvic varicose veins, however, not all experience symptoms. Studies have shown up to 30 percent of patients with chronic pelvic pain have pelvic congestion syndrome as a component of their pain.

Visit our Women’s Health section to learn more about pelvic congestion syndrome and see how Horizon Vascular Specialists can help you. 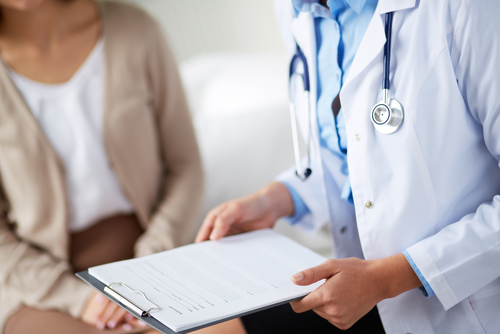 Adenomyosis is a benign disease when endometrial tissue, which normally lines the uterus, exists within and grows into the muscular wall of the uterus. The displaced endometrial tissue continues to act as it normally would — thickening, breaking down and bleeding — during each menstrual cycle. The blood can get trapped in the uterine wall producing a hard and enlarged uterus. Though adenomyosis is not considered a life-threatening condition, the frequent pain and heavy bleeding associated with it can have a negative impact on a woman’s quality of life.

1. The first type appears as a solid mass and is called “Adenomyomas”. They appear much like and can be mistaken for uterine fibroids.

2. The second, and more common type, is the diffuse disease that spreads out within the uterine muscular wall.
What are the risk factors of adenomyosis?

Adenomyosis is a common condition and is frequently seen in women in their early to middle 40’s and women who have had children. Women who have had prior uterine surgery may be at increased risk for adenomyosis. As high as 62% of women who had a hysterectomy were found to have this disease on pathology reports. The etiology and cause of adenomyosis remains unknown.

What are the signs and symptoms?

The signs and symptoms can be similar to those for uterine fibroids while adenomyosis can coexist with uterine fibroids. The severity is often directly proportional to the degree of involvement and penetration into the uterine muscle. Many patients with adenomyosis can be without symptoms just like fibroids, but most commonly women report the following symptoms:

How is adenomyosis diagnosed?

A pelvic exam by your doctor may reveal an enlarged and tender uterus. Modern imaging methods such as ultrasound and MRI have been a great aid in evaluating for adenomyosis in women with suggestive clinical symptoms. The only true and conclusive test to diagnose adenomyosis is a uterine muscle biopsy.
How is adenomyosis treated?

Mild symptoms may be treated with over-the-counter pain medications such as nonsteroidal anti-inflammatory drugs (NSAIDs) and the use of a heating pad to ease cramps.

Hormone therapy: Symptoms such as heavy or painful periods can be controlled with hormonal therapies, however, symptoms typically return once the medications are stopped.

Endometrial ablation: This procedure destroys the lining of the uterus and has been found to be effective in relieving symptoms in some patients where adenomyosis hasn’t penetrated deeply into the uterine muscle wall.

Surgery: Surgical resection of the adenomyosis alone is not feasible in most cases. The only definitive surgical option for adenomyosis is a hysterectomy.

Uterine artery embolization: Fortunately for women who want to avoid surgery, Uterine Artery Embolization (UAE) is an effective and safe therapy for adenomyosis, which can be performed by our specialized physicians at Horizon Vascular Specialists. In this minimally invasive procedure, tiny particles are used to block the blood vessels that provide blood flow to the adenomyosis. The particles are guided through a tiny tube to the arteries feeding the adenomyosis. With the blood supply interrupted, that area of adenomyosis will shrink in size with improvement in symptoms. This procedure is most commonly used to help treat uterine fibroids.

Visit our Women’s Health section to learn more about our services and see how Horizon Vascular Specialists can help you. 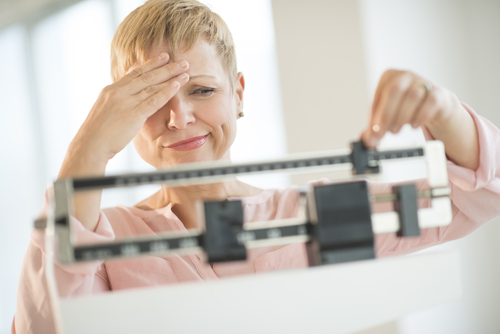 A common symptom of uterine fibroids is unexplained weight gain or enlargement of the abdomen. Fibroids can range in size, from as small as a pinhead to larger than a melon. The larger the fibroid, the more weight it contains as some have been reported weighing more than 20 pounds. It is not uncommon for some women to complain of having a pregnant-like belly from their fibroids.

Uterine fibroid growth is known to be stimulated by your body’s hormones such as estrogen and progesterone. Health care professionals have noted a link between being overweight and developing fibroids. Excess abdominal fat can trigger the overproduction of estrogen, which could make you more susceptible to fibroids and their associated symptoms. The US department of Health and Human services has stated the risk of uterine fibroids is two to three times greater in women who are obese.

Other Common Issues with Fibroids

Weight gain may also be inadvertent, as other fibroid symptoms such as pain, pressure, and excessive bleeding may force women to limit their physical activity. The heavy irregular bleeding can lead to anemia and exhaustion due to the loss of iron contained in the blood.

Women who have fibroids may possibly experience anxiety with the chronic discomfort and symptoms. Combining anxiety with overall fatigue could lead to more gain weight from increased food consumption and the lack of exercise.